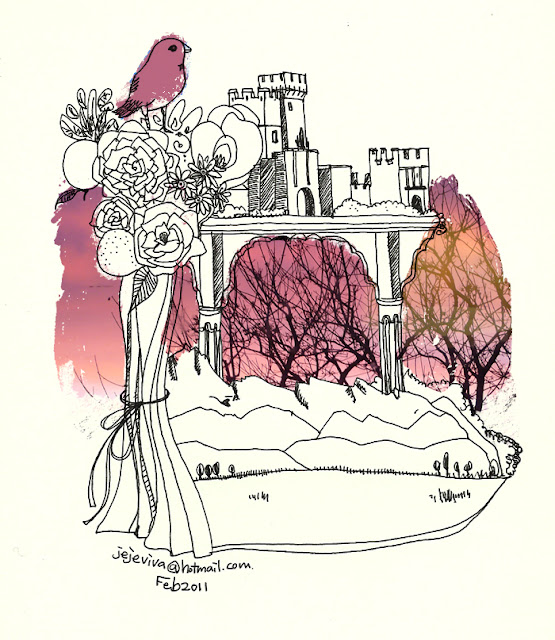 It was one of my favorite moments with the beautiful sky!

I couldn't do anything else, just I had to look at the sky.
Posted by Unknown at 02:10 No comments: 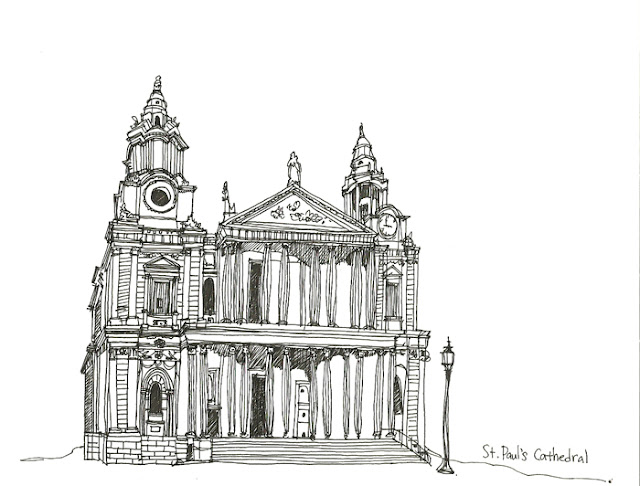 I used to draw many buildings when I travelled like this sketch.
When I arrived in the UK at first, I thought I could live with a traveller's mind. Now, it's very clear I was wrong. I haven't explored London since I came here. It seems like I lost my traveller's mind and attitude.
In fact, I decided to come here for my study when I was travelling Europe 5 years ago.
The cultural atmosphere was impressive, that's why I'm here now.
It was the first time to travel on my own. Travelling alone for 75 days gave me lots of time to think about what I wanted to do for my life. I loved drawing on my skechbooks under the sunshine and listening to music. Also, I met many people at that time, I couldn't feel lonely because of the kind and lovely people.
I thought and believed that I was really really lucky.
Well, for now, I'm living in my dream which I dreamt 5 years ago. However, I sometimes feel sad and lonely unlike 5 years ago, the worst thing is I often forget How lucky I am!
It isn't that late, I'll find my free mind and attitude again as a lucky traveller.
Anyhow, I believe that we are all traveller on the earth.
Posted by Unknown at 22:44 No comments: 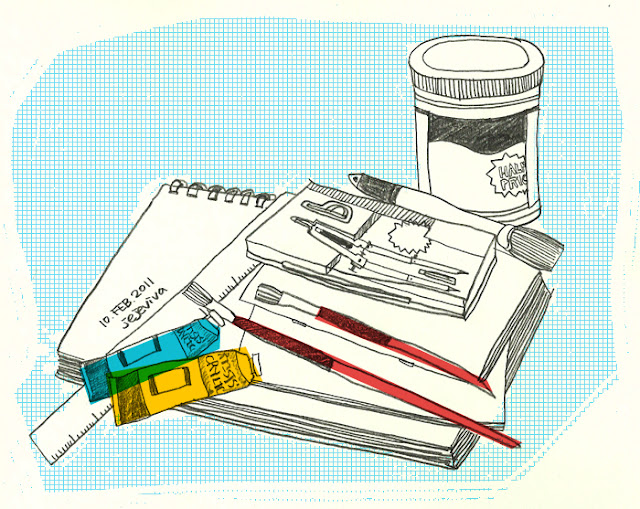 About 2 weeks ago, I went to the art shop and then came back with these items.
Whenever I go to the art shops, I'm just really happy and happy.
I like looking at the art stuff even though I don't use them or I haven't use them in my life!
Of course, I like buying them as well. It's one of my favorite shopping spaces.
In particular, on that day, they gave me some free stuff! I loveeeeed it! (I don't need them though! :P)
I bought those which made me happy and creative - Well, it's not 100% true.
However, I couldn't buy the beautiful oil-pastels...... oh! The colours were awesome!
What an unfilled desire! :{
Posted by Unknown at 23:36 1 comment: 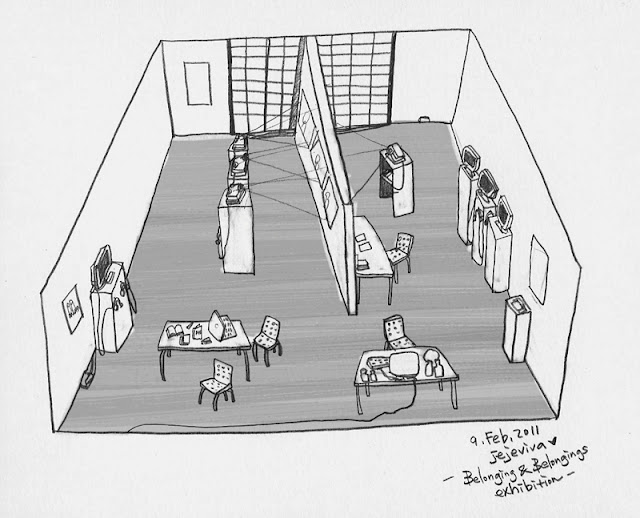 We did the exhibition - "Belonging & Belongings" video installations for two days.
Above drawing is the exhibition place. Well, It was an interesting experience.
In fact, we finished this project - 'Belonging & Belongings' which was a collaborative project with STBY last year. The project was a design research about the online and offline identities. We worked as a group and made a film in order to show our perseptive on the topic. There were total five groups, we started with the same brief but the results of each group were obviously different. It wasn't an easy project to do because we had to make a documentary film which was unfamiliar to us. Even though it was hard, I enjoyed the project because it showed me the different way of design thinking and approach. 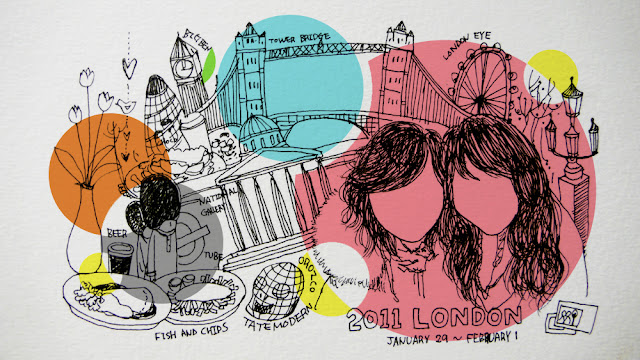 One of my friends visited me from Seoul last weekend. It was such a great time, even though it was extremely short, just 3 nights!!!!! I have known her ever since we were 12-13 years old. (In fact, I can't remember how old we were exactely.) I wanted to show her as many things as possible! It was impossible though. She is now in Paris for the rest of her holiday. I hope she is having a good time in Paris.
This was a samll drawing for her as a gift to remember the time which we were together in London. :) 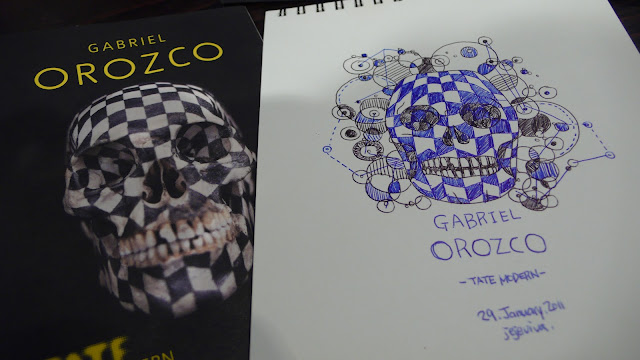 Creative, playful and inventive, Gabriel Orozco creates art in the streets, his apartment or wherever he is inspired. Born in Mexico but working across the globe, Orozco is renowned for his endless experimentation with found objects, which he subtly alters.
His sculptures, often made of everyday things that have interested him, reveal new ways of looking at something familiar. A skull with a geometric pattern carefully drawn onto it, a classic Citroën DS car which the artist sliced into thirds, removing the central part to exaggerate its streamlined design, and a scroll filled with numbers cut out of a phone book are just some of his unique sculptures.
Orozco’s photos are also on display, capturing the beauty of fleeting moments: water collecting in a punctured football, tins of cat food arranged on top of watermelons in a supermarket, or condensed breath disappearing from the surface of a piano show Orozco’s eye for simple but surprising and powerful images.
His art also shows his fascination with game-playing, for example a billiard table with no pockets and a pendulum-like hanging ball, or Knights Running Endlessly, an extended chess board filled with an army of horses, both of which are well-known games to which he has added an element of futility. This kind of unexpected twist makes Orozco’s work interesting to both contemporary art lovers and also anyone who wants an unusual and captivating art experience.

- text : http://www.tate.org.uk/modern/exhibitions/gabrielorozco/default.shtm
- image : a drawing after visiting the exhibition

It was really interesting, his unique perspective inspired me with his art works.
One of my favourites was the photographic series 'Until you find another yellow schwalbe 1995'. During a residency in Berline, he bought a yellow schwalbe - a motorscooter. Then he was looking for matching scooters in the city, he took the photos of the pair wherever they 'met'. It's a funny idea!!! I like the point which he has been trying to create art with his daily life.
Well, let's do it something within everyday life! :)
Posted by Unknown at 21:07 No comments: