[outline] A DESIGNER IN SOCIETY v1

This writing is the ouline of my research. It was very difficult to decide which subject I would study through my course. Finally, I've got this one, 'Social Design'. (In fact, I'm still a bit confused.) I studied Social Welfare before studing Design. Because of my educational background, I am naturally interested in social problems and their remedis. Well, I hope that I find out what my real position and goal are as a graphic designer.
It is the start of my long journey! I will post more case studies, results of my research in order to make me work more and more. Wish me luck!
A DESIGNER IN SOCIETY

It is certainly true that designers’ help is needed everywhere. In other words, nowadays we have more opportunities to work as designers. Designers are trying to make many things work and look good. However, is it truly enough to design things only beautiful? What else can I do as a designer?
I believe that being concerned about the problems and the real situations of society is a natural liability as a citizen. Milton Glaser, who is a famous American graphic designer, says “Good design is good citizenship”. Some people would argue about what “good design” means. For this reason, I would like to study, analyse and compare some cases in order to define “good design” and also find out what the responsible role of designers is in a design process.
l  A History of Good, Ethical Graphic Design
According to Modern art and design history, there were some phenomenal actions by several designers. In particular, THE FIRST THINGS FIRST MANIFESTO was published by Ken Garland, a British graphic designer, in 1964. He tried to re-radicalise design which had become lazy and uncritical in the UK and over 400 graphic designers and artists backed up. It was updated and republished in 2000 by Adbusters magazine, an organization founded in 1989 by Kalle Lasn and Bill Schmalz in Canada.
THE FIRST THINGS FIRST MANIFESTO 2000 was signed by 33 graphic designers and critics, many of them were well known around the world such as Milton Glaser, Tibor Kalman, Jonathan Barnbrook, and Steven Heller. Many designers responded the manifesto enthusiastically, whereas others rejected it. Anyhow, it proves there has been the question of responsible design among the graphic designers. They believed that designers should be critical and concern about their works, for instance by not promoting industries and products perceived to be harmful. 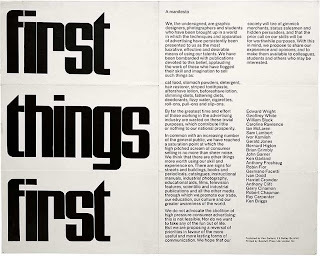 l  The concept of Social Design
There are many definitions about what social design means across the different areas. In the design world, social design is defined as a design process that works to make better human welfare and livelihood. The agenda of social design is inspired by Victor Papanek’s (an Austrian designer and educator) idea that designers and creative professionals have a responsibility and are able to cause real change in the world through good design.
l  Case Studies
We can find various issues in society, such as environment, health, poverty, education, culture, peace, etc. Some of them are dangerously strained, while others can be considered less serious. There are a number of organizations and designers who are concerned about these problems. Among them, I will analyse the following cases here:
1)     Walking the Way to Health Initiative – Ellie Ridsdale
2)     Sphere Magazine – Worldstudio Foundation
3)     Merry in Kobe – Koji Mizutani
4)     The Earth Centre – thomas.mattews
5)     Human-centered Design Toolkit – IDEO
As a conclusion, I cannot say we could change the world by using design skills. However, through this essay I would like to contemplate the role of designers who have strong communication abilities, because I believe the responsible design gives people a chance to think about society and other people’s lives. Furthermore, what I am inclined to do is conducting a campaign for one of my social concerns in order to put into practice.
Bibliography
-       “The First Things First Manifesto”, Kel Garland, 1964.
-       “The First Things First Manifesto”, Eye magazine no.33 vol. 8, 1999.
-       Michael Bierut, William Drenttel, Steven Heller, “Looking Closer Four: Critical Writings on Graphic Design”, Allworth Press, 2002.
-       John Cranmer, Yolanda Zappaterra, “Conscientious Objectives: Designing for an Ethical Message”, Rotovision, 2003.
-       Victor Papanek, “Design for the real world”, Thames & Hudson, 1984.
-       “Design for the other 90%”, Smithsonian Institution, 2007
Posted by Unknown at 00:16